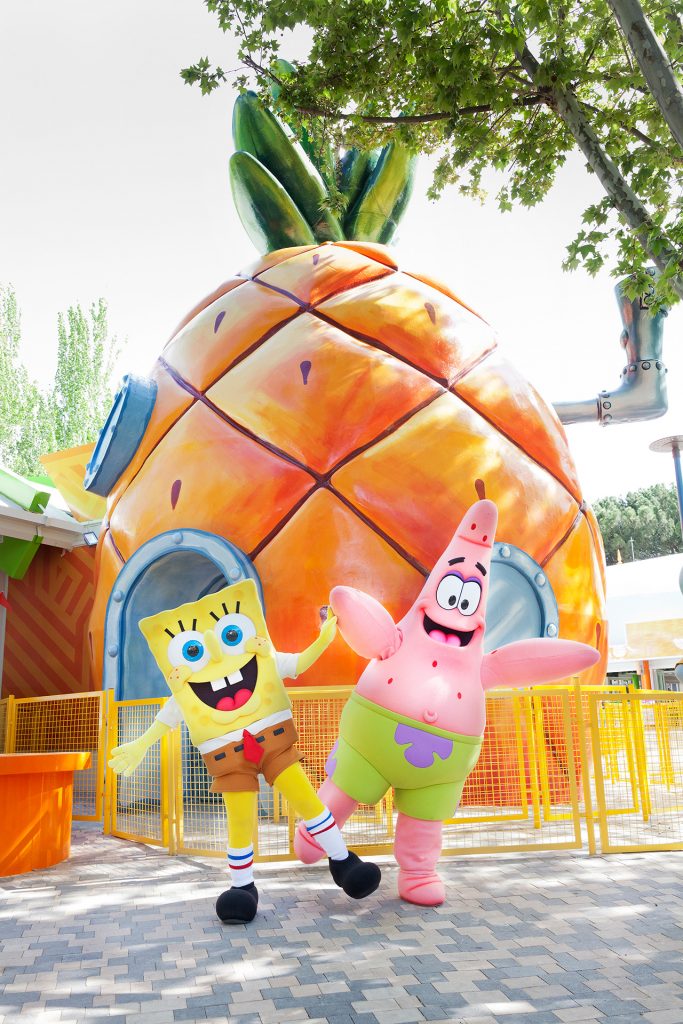 Madrid 30 April 2014 – Viacom International Media Networks (VIMN) Spain, a division of Viacom Inc. (NASDAQ: VIA, VIAB), a leading provider of youth and general entertainment content and Parques Reunidos, one of the leading and fastest growing leisure park operators in the world, today announced the opening of Nickelodeon Land, the first Nickelodeon-branded attraction in Spain.

Nickelodeon, one of the world’s leading global entertainment brands for kids and family, has brought its characters, interactive shows, and attractions to Parque de Atracciones in Madrid, one of the region’s most preferred tourist destinations which receives millions of visitors every year.

Nickelodeon Land has 15000 square meters, completely customized in the Nickelodeon style. There are 10 new rides, where the youngest of the family can enjoy while spending some time with Sponge Bob Square Pants, Patrick Star, Dora or the Ninja Turtles, amongst many others. Nickelodeon Land also counts with a restaurant, a shop and leisure areas and will also add its main feature slime soon.

Gerald Raines, Vice President Recreation Business Development Nickelodeon, said: “Nickelodeon is one of the world’s leading entertainment brands for kids and family, our mission is to give kids around the world the most fun, and exciting content possible. Through our Recreation offerings, we bring the Nickelodeon brand and characters to life through theme park attractions, character integrations, entertainment programs and live theatrical productions. Today we announced the grand opening of the newest Recreation addition to the Nickelodeon family, thanks to the partnership with Parque de Atracciones. We are thrilled to bring this new Nickelodeon attraction to our fans in Spain”

Diego Gracia, GM of Parque de Atracciones de Madrid, explained to the media that “Nickelodeon Land is a big improvement of its premises, as a consequence of the renewal strategy that PAM started ten years ago, with such positive results. Nickelodeon Land is a family area where the families could enjoy a family day, and where they will enjoy the new rides and the customization, enjoying also the company of the Nickelodeon characters”

NICKELODEON is one of the most globally recognized and widely distributed multimedia entertainment brands for kids and family. It has built a diverse, global business by putting kids first in everything it does. The company’s portfolio includes television programming and production around the world, plus special events, consumer products, digital offerings, recreation, books, feature films and pro-social initiatives. Nickelodeon’s brands are seen globally in more than 450 million households in over 100 territories via more than 70 locally programmed channels and syndication. Outside of the United States, Nickelodeon is part of Viacom International Media Networks, a division of Viacom Inc. (NASDAQ: VIA, VIAB), one of the world’s leading creators of programming and content across all media platforms. Nickelodeon in Spain is available on Canal +, ONO, Movistar TV, Euskaltel, Telecable, R, Orange TV and other cable operators.

Viacom International Media Networks (VIMN), a unit of Viacom Inc. (NASDAQ: VIA, VIAB), is comprised of many of the world’s most popular multimedia entertainment brands, including MTV, Nickelodeon, Comedy Central, BET, Paramount Channel, VH1, VIVA, COLORS, Game One and Tr3s: MTV, Música y Más. Viacom brands are seen globally in more than 600 million households in 170 territories and 37 languages via more than 200 locally programmed and operated TV channels and more than 550 digital media and mobile TV properties. For more information about Viacom and its businesses, visit www.viacom.com. Keep up with Viacom news by following Viacom’s blog at blog.viacom.com and Twitter feed at www.twitter.com/Viacom.

Parques Reunidos is one of the leading and fastest growing leisure park operators in the world. The Group portfolio is made up of 69 operations (theme or amusement parks, nature and animal parks, water parks, family entertainment centers and cable cars). The Group has continued its expansion in recent years, reaffirming itself as a leader in the Spanish leisure sector and a reference operator in this market, at both the European and international level, receiving about 26.2 million visitors every year in 12 countries in the Americas and Europe. For more information about Parques Reunidos please visit www.parquesreunidos.com