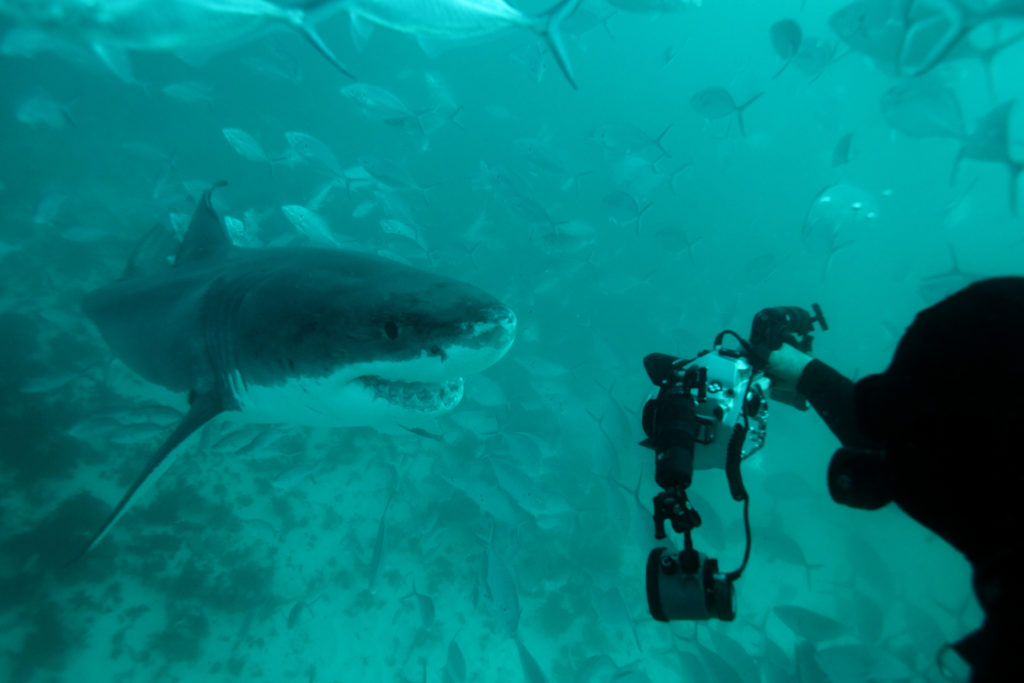 Alessandro de Maddalena, a biologist, researcher and one of the world’s biggest shark experts shared his experience and knowledge about these extraordinary animals with the half-hundred people who attended his first conference in Spain, ‘Great White Sharks of Australia’, hosted in collaboration with the National Museum for Natural Science and sponsored by the Parques Reunidos Foundation.

A passion for sharks

For more than an hour and a half, De Maddalena shared what has been is passion since he was a 7 or 8-year-old boy and watched a shark documentary for the first time.

That’s when his fascination for these animals was born, marking his life journey: devoting his life to studying sharks.

South Africa, Australia… but, as De Maddalena explained, 100 years ago it was just as usual to find great white sharks (Carcharodon carcharias) in the Mediterranean, especially in areas near to Croatia, Sicily, the Balearic Islands or Tunis.

Most white sharks have disappeared, even though their presence is key to maintain their ecosystem

However, for the last 60 to 70 years the chance to spot this animals is les and less likely because the majority of them have been killed my mankind.

De Maddalena is saddened to acknowledge that, even though seeing one single white shark in the Mediterranean this days is very rare, every time it happens the media treats it like a common event. This message creates fear among the population in spite of the rarety of these animals.

In 1967 Steven Spielberg’s film “Jaws” created a new source of interest towards these animals, but it also produced a wrong perception of the species; many people around the world feared sharks due to their presumed aggresiveness and the danger this entailed for every human who would cross a shark’s path.

In spite of what most people believe, it is very rare to be attacked by a white shark

Yet, De Maddalena clarifies that this believe is quite mistaken. “They don’t eat people“, the expert explained. He relies on the statistics to prove his statements:

“In the whole world we have approximately 100 people attacked by sharks per year, not only by great whites, but every species of shark. […] Only about 10 of these people will die because of these shark attacks”.

On the other hand, De Maddalena also reminded the audience that sharks are not very agressive animals. He shared his experience about how it feels when “you are in a cage and you see them coming towards you not with the intention of eating you or harming you. Rather. they just want to take a look, because they are extremely curious creatures“. 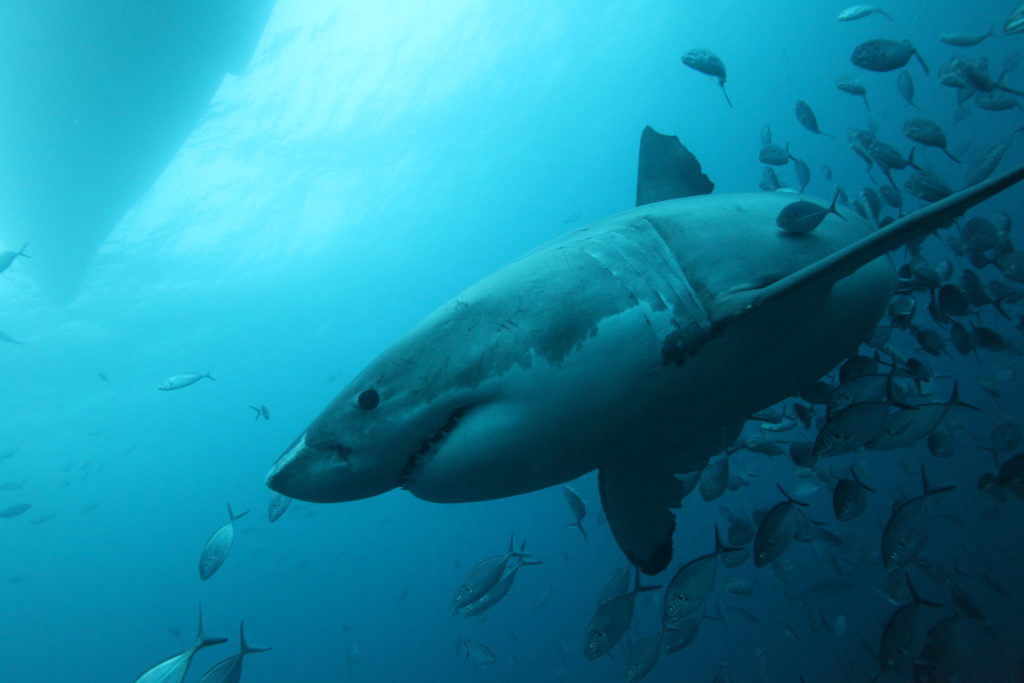 Similarly, the biologist and researcher enphasized that these animals are part of the environment. They are fundamental players in the maintenance of their ecosystem and the food chain.

“Protecting sharks is an issue where we need to devote all necessary efforts immediately. Failing to do so could entail serious consequences for the planet in general. The problem in Europe is that we don’t have the appropriate regulation. Some species are protected on paper, but in practice they are not. Passing laws is not enough; we need methods to follow up and ensure their implementation“.

Years ago, the original white sharks population worldwide reached around one million individuals. Nowadays, this number has been heavily reduced by many countries around the world, and Spain is no exception. Spain is, in fact, the second country to be responsible of most shark deaths, just after China.

In the last 50 years, some shark species have experienced up to a 90% population decrease simply due to their presumed danger. Fortunately, some countries like Australia have begun fostering shark conservation.

Sharks are interesting animals with a strong personality

As a matter of fact, sharks are very interesting animals.

Their skin shows a number of dark spots known as ampullae of Lorenzini. They are special sensory organs formed by a network of electroreceptive channels. Sharks use these organs to detect other animals who are close to them. Objects containing metal, like cages and cameras, are thus extremely attractive to sharks, which explains why they immediately approach divers.

On the sides of their body they have big branchial arches. Their size is due to the fact that sharks need big amounts of oxygen in order to maintain their intense lifestyle and to burn high amounts of glucose. White Sharks can jump up to 3 meters (almost 10 feet) above water surface. They can also swim at a speed of 50 km per hour (30 miles/hour). 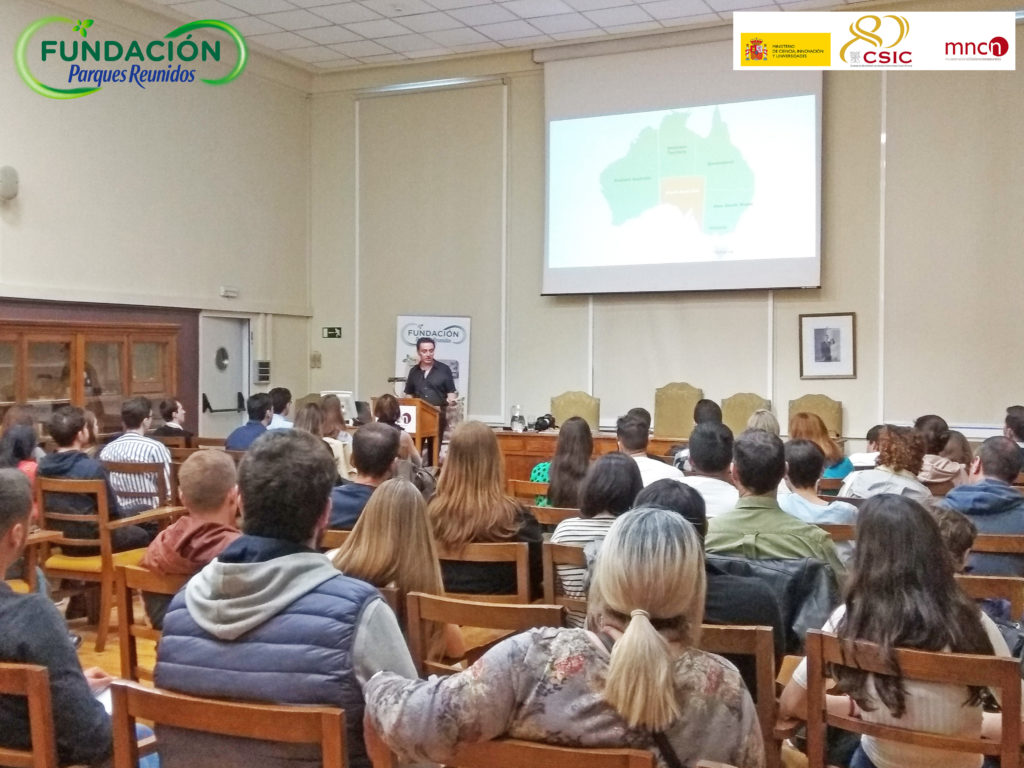 Alessandro De Maddalena during his lecture at the National Museum of Natural Sciences in Madrid on April 14, 2019

Sharks posess a body temperature autoregulation system, which allows them to adapt to tropical and cold water alike. They can migrate to any latitude. Their strong personality is also characteristic, which makes every shark quite different to the next.

For De Maddalena sharks are very attractive animals. Yet, he is especially fascinated by the “great white shark” due to its beauty. Great white sharks are easily identifiable due to their white lower half, a strongly visible lateral line, and their dolphin-like shape.

Creating awareness about the shark conversation

For the Parques Reunidos Foundation it is fundamental to create awareness about the current situation and the dangers faced by sharks every day.

Organizing activities to spread the word about this issue, such as this lecture hosted by the National Museum for Natural Sciences, with the participation of experts like Alessandro de Maddalena, is just one small contribution within our overall commitment to inform and educate citizens, this cintributing to increasing the awareness about caring after oceans and the animal world. 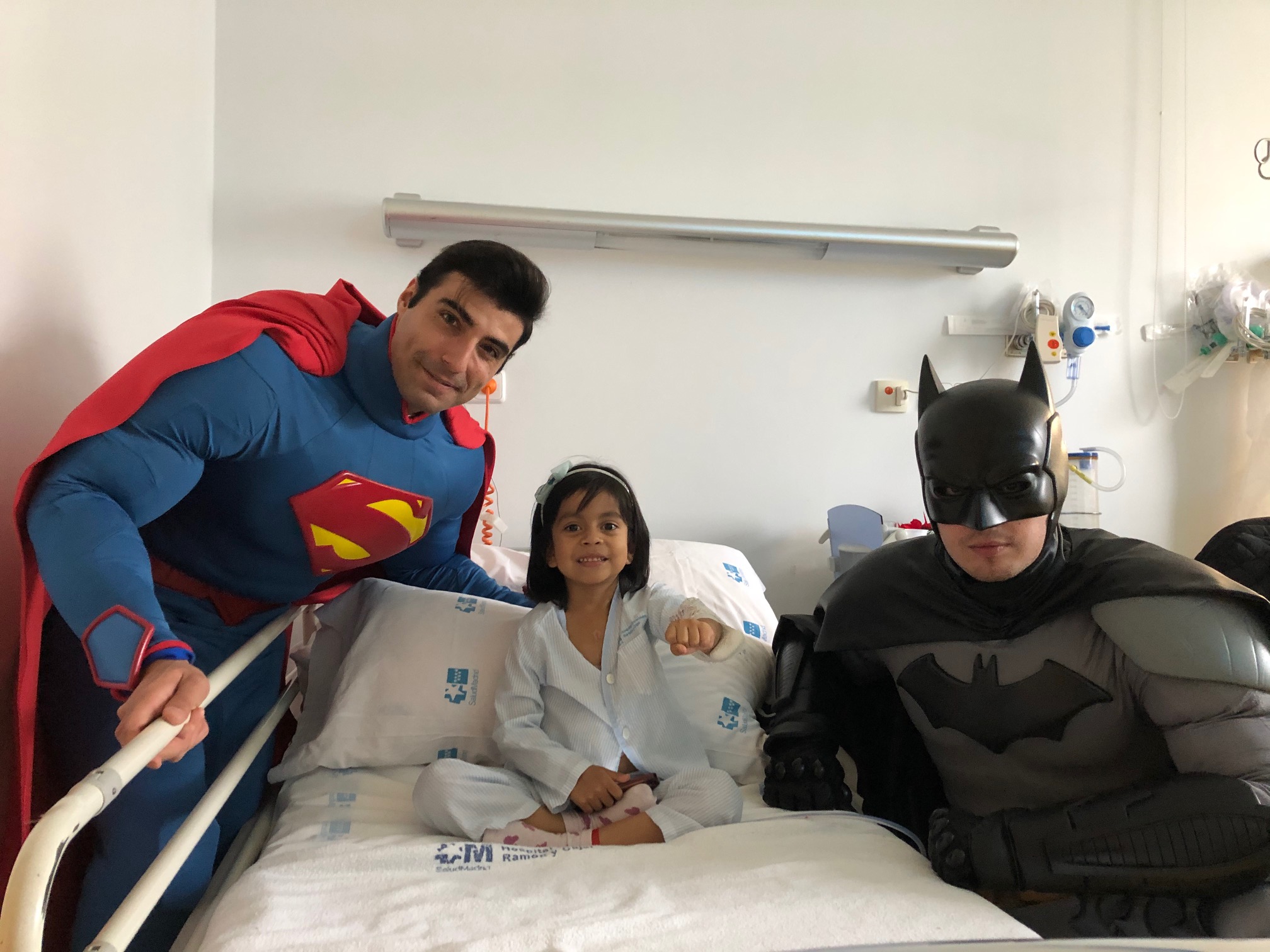