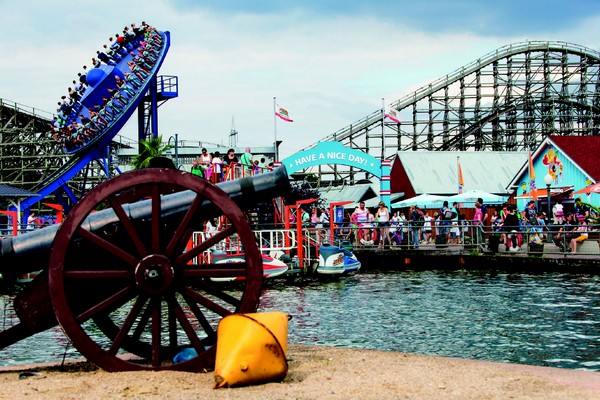 (Bottrop-Kirchhellen, 06 July 2016).- The guests in Movie Park Germany can expect an exceptional roller coaster in 2017. The coaster will not only be the second highest construction in the park but will also be a worldwide unique attraction in an amusement park utilizing Star Trek. “We are excited and proud that we obtained the Star Trek license from CBS Consumer Products in the USA. Through this we are redefining the benchmark for Germany’s largest film and amusement park,” states General Manager Thorsten Backhaus. For 50 years, Star Trek has appealed to generations with iconic characters such as Captain Kirk, Spock and Captain Picard.

The manufacturer of the ride also reinforces the park’s focus on quality. “For this significant project we have selected to work with the Company Mack Rides, the largest German manufacturer of roller coasters and amusement park attractions,” says Thorsten Backhaus .The company works internationally but the construction of a roller coaster in a German amusement park is something really special. Christian Freiherr von Elverfeldt, CEO of Mack Rides, is happy about this. “With an average of 90 percent of our products produced for export, it’s really special for us to construct such a fantastic coaster in Movie Park Germany.”

The City of Bottrop’s Council has provided the final approval for the construction of the coaster -punctually for the Park’s 20-year anniversary. Thorsten Backhaus is pleased about it: “We appreciate the trust from Bottrop and we can hardly wait to really start with this prestigious project.” The future position of the roller coaster will be located directly in the entrance of Movie Park Germany. Its impressive silhouette will be the eye catcher for the guests when arriving in the park. “Only the Free Fall Tower ride in park will be higher,” states the General Manager when describing the dimensions of the project.

The new coaster will be what is known as a launch coaster, with which the guests will begin the experience with an accelerated catapulting and not first drawn over a hill with a respective drop. “We have an element in the routing, which is unparalleled in Europe and will definitely surprise our guests,” said the General Manager, revealing an initial detail of the coaster. In the coming weeks the construction of the tracks will be started.

With the realization of this roller coaster, Germany’s largest film and amusement park is not only developing further its portfolio for family and teenagers, but also is directly reacting to its guest’s input, explains General Manager Thorsten Backhaus. “Guest research, which is regularly carried out in the park, has provided us with clear input that they wish a new major thrill attraction. In 2017 this wish will be fulfilled.”

According to the motto of “Wow, I’m in the movies!” Movie Park Germany has been bringing unique entertaining experiences to guests with movie-based shows, attractions and events since 1996. Over 40 different attractions on an area of around 45 hectares in size allow guests to experience the excitement, entertainment and thrills of the movies. Germany’s biggest movie and entertainment park is a special experience for adults and children alike. It was certified as “OK for Kids” by the TÜV technical monitoring board in 2006. With Nickland, one of the biggest NICK theme areas in the world, and its TV heroes from Ice Age, Sponge Bob, Cosmo and Wanda, the park is ideal for families

Parques Reunidos is one of the leading, leisure park operators in the world. The Group portfolio is made up of 55 operations (attraction parks, animal parks, water parks, entertainment centres and other attractions). The Group has continued its expansion in recent years and is currently present in 12 countries in the Americas and Europe, and receives a total of approximately 20 million visitors* per year. For more information about Parques Reunidos please visit www.parquesreunidos.com.