Parques Reunidos expands its international presence in Dubai with Motiongate, one of the largest Hollywood-inspired parks 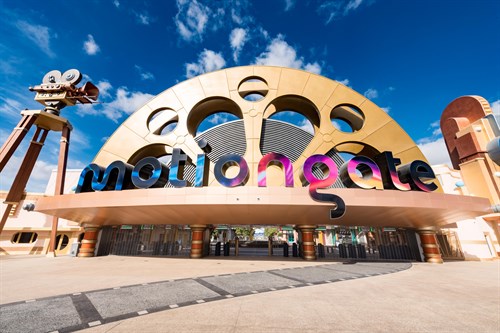 Madrid. Monday, December 19, 2016. Parques Reunidos, one of the world’s leading leisure park operators, expands its international presence with the management of a new park in Dubai – Motiongate. This represents the only park in the world bringing together three of Hollywood’s most legendary movie studios: DreamWorks Animation, Columbia Pictures and Lionsgate. Motiongate is part of Dubai Parks & Resorts, the Middle East’s largest multi-themed leisure and entertainment destination in which around 3.422 million Euro has been invested.

Motiongate’s attractions are inspired by 13 of Hollywood´s most memorable live action and animated films such as The Hunger Games, The Smurfs, Kung Fu Panda, Shrek and Ghostbusters. The park is divided up into five thematic areas and offers 27 attractions, 21 of which are indoor, along with 4D motion simulators, more than 15 live shows, 15 shops and 9 themed restaurants.

The opening of Motiongate and Dubai Parks & Resorts was held last weekend and boasted the attendance, among others, of the Prime Minister of the United Arab Emirates, the CEO of DXB Entertainments PJSC, owner of Dubai Parks & Resorts and, on the part of Parques Reunidos, its CEO Fernando Eiroa.

Fernando Eiroa declared that: “One of the main strategies of Parques Reunidos’ business plan is to continue expanding internationally and consolidate itself as one of the most diversified operators in the world. With the opening of Motiongate within the Dubai Parks & Resorts complex we are taking another step into a market which is key for us, the Middle East”.

The opening of Motiongate joins the recent inauguration of Bollywood Parks, also managed by Parques Reunidos. This is the first-of-its-kind theme park that showcases rides and attractions based on some of Bollywood’s biggest blockbusters.

By means of this operation, Parques Reunidos expands its territorial presence in the Middle East and is now present in 62 parks in 14 countries, with around 20 million visitors per year.

Motiongate has five distinct zones, each of which offer a unique cinematic experience:

The entire destination will be connected by Riverland™ Dubai – a uniquely themed retail and dining destination at the heart of Dubai Parks and Resorts, and guests can stay at the Lapita™ Hotel, a Polynesian themed family hotel part of the Marriott Autograph Collection.

Located on Sheikh Zayed Road opposite the Palm Jebel Ali in Dubai equidistant to Dubai and Abu Dhabi International Airports the destination offers over 100 rides and attractions.

For more information, go to: http://dubaiparksandresorts.com

DXB Entertainments PJSC is a Dubai headquartered leisure and entertainment company traded on the Dubai Financial Market (DFM) under the trading symbol DXBE. As of the 30 September 2016 it had a market cap of AED 12.6 billion.

DXB Entertainments was listed on the DFM in December 2014 originally as Dubai Parks and Resorts PJSC. DXB Entertainments owns the Dubai Parks and Resorts destination which consists of 4 theme parks (Six Flags Dubai opening in 2019) and 1 water park all at the same location. The large-scale AED 13.2 billion development is spread across 30.6 million square feet of land with 6.7 million ticketed visits expected in 2017, the first full year of operation.