“Lionsgate Entertainment City” is the first indoor entertainment center to open in a European landmark building and will feature interactive experiences based on Lionsgate’s blockbuster movie franchises and popular television shows. Visitors will be invited to explore the world of The Hunger Games, prove they have what it takes to be “Dauntless” in The Divergent Series, or step back in time into a restaurant and lounge inspired by the one frequented by Don Draper in Mad Men. Designed to target young adults and adults, the center will feature multiple attractions, including a challenge course and climbing wall, state-of-the-art motion simulator, 4D theater, and location-based VR experiences.

Madrid’s “Lionsgate Entertainment City” will cover 4,200 square meters and will be integrated in the Príncipe Pío leisure complex, which includes a theater and a concert hall. Príncipe Pío is a historic and highly visited location in Madrid City Center providing great brand exposure. The center will also include a terrace with views to the Royal Palace and Madrid’s Cathedral.

“Parques Reunidos has a strong expansion plan for Indoor Entertainment Centers (IECs), which will be open to the public year-round throughout Europe and the U.S.,” explained CEO of Parques Reunidos, Fernando Eiroa. “Parques Reunidos’ experience combined with Lionsgate’s iconic properties– like The Hunger Games, Divergent, and Mad Men— will allow us to create the first branded IEC of this kind in Europe. Visitors will be able to live through total immersion experiences via multiple virtual reality simulators and dine with Don Draper-style at this new exciting location.”

“We are thrilled to continue our global partnership with Parques Reunidos with the opening of our second Lionsgate Entertainment City location and our first  branded leisure center in Europe,” said Lionsgate Senior Vice President of Global Live and Location Based Entertainment Jenefer Brown. “We look forward to introducing exciting and immersive experiences themed to our popular film and television brands to audiences in Parques Reunidos’ hometown of Madrid.” 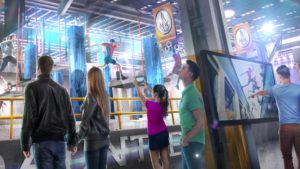 The first major new studio in decades, Lionsgate (NYSE: LGF.A, LGF.B) is a global content platform whose films, television series, digital products and linear and over-the-top platforms reach next generation audiences around the world.  In addition to its filmed entertainment leadership, Lionsgate content drives a growing presence in interactive and location-based entertainment, gaming, virtual reality and other new entertainment technologies.  Lionsgate’s content initiatives are backed by a 16,000-title film and television library and delivered through a global licensing infrastructure.  The Lionsgate brand is synonymous with original, daring and ground-breaking content created with special emphasis on the evolving patterns and diverse composition of the Company’s worldwide consumer base.

Press Release as a PDF