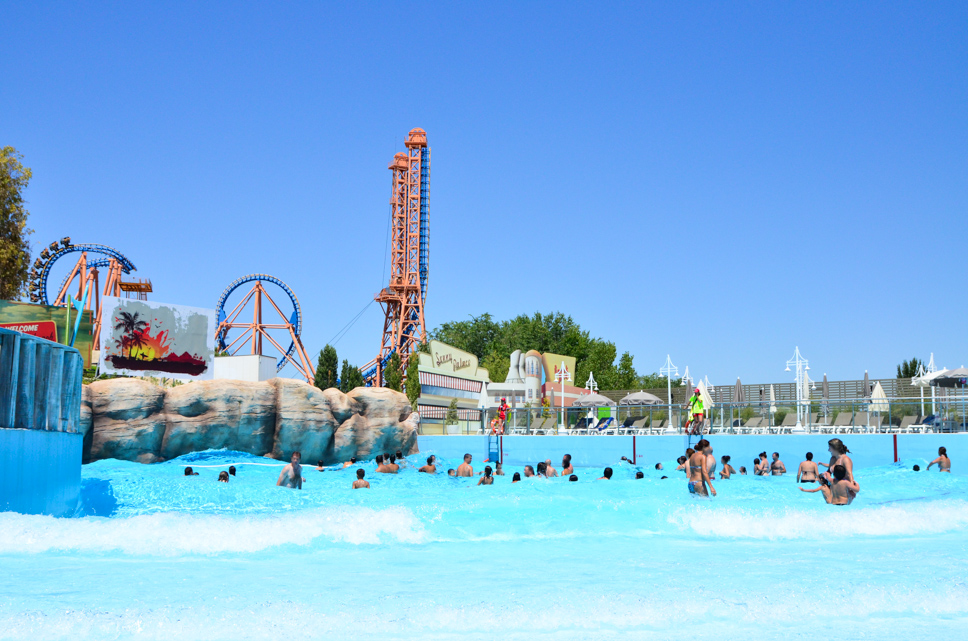 Madrid, 17 June 2014 –Parque Warner Madrid prepares its big opening, the Warner Beach Park, a space designated for fun which has two huge wave pools, one for adults and one for children; one thematized lazy river with the favorite characters from Hanna Barbera for the youngest people, and two water game parks where children can play and splash with the Looney Tunes’ family. In addition, Warner Beach has a solarium with beach sand where visitors can sunbathe and relax during their visit, and a VIP area, which will transport you to the chicest piers from the California coast.

A unique place where you can swim with Tweety, Bugs Bunny or The Flintstons; enjoy huge waves and even sunbathe on a very special beach without leaving Madrid. No doubt that Warner Park will become the best choice of leisure and fun this summer.

In addition to thousands of square meters designed to bring comfort to its visitors, Warner Beach Park has one store and two restaurants: one self service dedicated to The Flintstones, The Big Kahuna BBQ, that will make you feel an unforgettable Hawaiian experience; and The Embarcadero with Scooby Doo, a real beach cottage with the most appetizing fast food. Not to forget the basic facilities: toilets, showers, sunbeds, setpoints…

The inauguration of the Warner Beach Park will diversify even further the enjoyment offer of all kind of visitors.

This new aquatic area -which will have an extra cost over the park entrance-, is located behind the DC Super Heroes World area. Therefore, the access will be through Warner Park and you cannot enter directly from the outside.

With this new expansion, Parque Warner Madrid will have six thematic areas. Warner Beach Park will be open until September; Hollywood Boulevard, where visitors can meet Marilyn Monroe while they walk along broad avenues that recreate the glamorous Hollywood; and Warner Bros Studios -the ideal area for cinema lovers- where you will discover the secrets of the Seventh Art. Visitors will meet the heroes and heroines at the DC Super Heroes World, and Far West enthusiasts will delight themselves among the coolest cowboys in the Old West Territory. Little kids will enjoy unforgettable moments in the Cartoon Village, the largest children’s area in Spain, where is easy to find the most beloved characters of Warner: Bugs Bunny, Tweety and Daffy Duck, among others.

Parque Warner Madrid is one of the most complete and modern theme amusement parks in Europe. Its more than 700,000 hectares are divided into five major areas: Hollywood Boulevard, Warner Bros Studios, DC Super Heroes World, Cartoon Village and Old West. Parque Warner Madrid has 36 rides spread over these areas, some of them unique in Europe. Each day, the 58 performances that take place throughout 18 shows, parades and different animations, will make the entire family enjoy in a unique space. Large and varied dining options and ten thematized shops complete this space for leisure and fun.

Parques Reunidos is the second largest operator of leisure parks in Europe, with 69 parks (theme or amusement parks, nature and animal parks, water parks, family entertainment centers and cable cars), with a strong presence in USA, Spain, France, Italy, Norway, Germany, Belgium, Holland, United Kingdom, Denmark and Argentina. The Group has continued its expansion in Europe and America in recent years, reaffirming itself as a leader in the Spanish leisure sector and a reference operator in this market, at both the European and international level, receiving about 26.2 million visitors annually. www.parquesreunidos.com