From one roller coaster to a “Land of Legends” 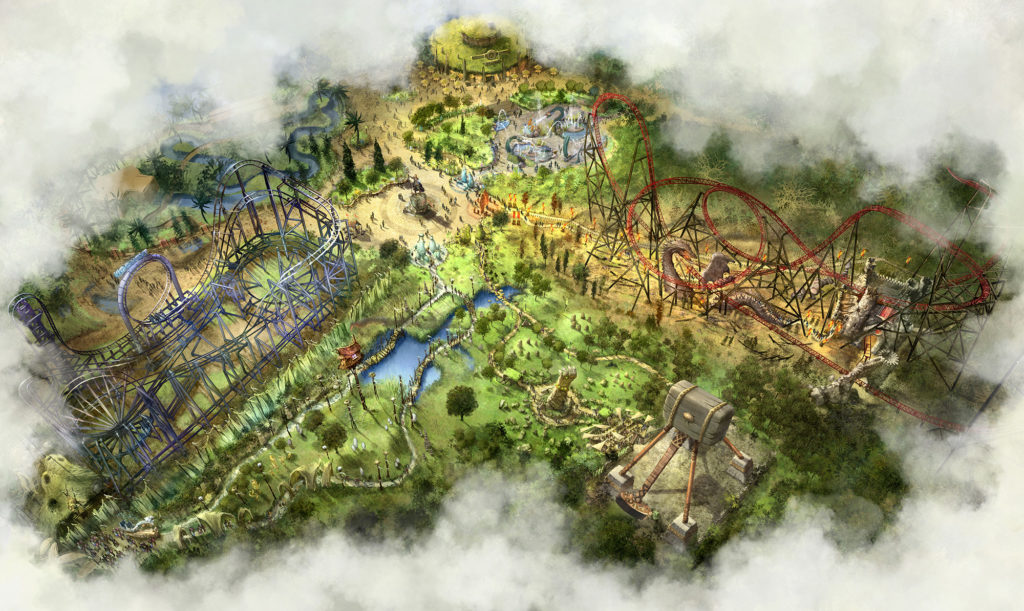 The news we’ve had from Belgium have surprised Bobbejaanland fans and amusement park lovers alike. In November 2018, the Belgian park announced a spectacular new roller coaster that would open in 2019. Who would have thought then that the project would actually entail the construction of a totally new themed area!

Yves Peeters, the park’s general manager, revealed that the new themed area will be “the first themed are in Bobbejaanland to offer a complete experience”. We invite you to read on and discover some more details about the new adventure coming to Bobbejaanland.

FOUR ATTRACTIONS AND A STORY WHERE YOU ARE THE MAIN CHARACTER

Developing this themed are will be the biggest investment in the history of Bobbejaanland. Its objective is to create a fictional real and a compelling story that will encourage visitors to take part in its unfolding. The drawings and designs from the theming show how the areas surrounding the attractions will fill up with decorations and sculptures that will turn this area of the Belgian park into an authentic Land of Legends

AN ADVENTURE TO SAVE THE ELEMENTS

To build the storyline underlining Land of Legends, Bobbejaanland secured the collaboration of Mathinda Masters, a well-known Flemish writer who specializes in fiction for children and youth. With her help, Bobbejaanland hopes to delve deeper into the possibilities the story can offer, this providing the public with a solid and appealing short story. For now, we can provide a short summary:

TRIPLE LAUNCH… ARE YOU READY?

Fury, the ride of fire, will be the star at the new themed area. This ride will be an Infinity Coaster by German manufacturer Gerstlauer Amusement Rides. It’s most innovative feature, however, is its LSM (Linear Synchronous Motors) technology: an electromagnetic propulsion mechanism which uses electricity to propel the cars up and down the rails at a high speed.

While riding Fury, you will face Fogo the dragon (whose name, by the way, means “fire” in Portuguese). Fury will feature three different launches, which will turn this new ride into one of the most thrilling roller coasters in Belgium. The ride propels the cars forwards, then backwards, then forwards again along more than 600 meters of track, reaching more than 100km/h and ascending over 40 meters.